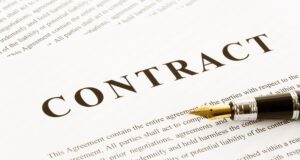 The Indian Contract Act was passed within the year 1872 and it came into force on the  1st day of September, 1872. The Act extends to the entire of India except the State of Jammu and Kashmir. It consists of 238 sections. it’s been divided into 10 chapters. Chapter VII of the Contract Act is wholly repealed by the Indian Sale of Goods Act, 1930 (vide section 65). The Contract Act deals with particular contracts in separate chapters.

In case of a accept which two or more countries are involved in respect of its
performance, questions arise on the law of which country would govern such a
contract. within the first instance, the law which might govern such a contract would
be the law expressed by the parties themselves within the contract. within the absence of an expressed intention, the rule to use is to infer an intention from the terms
and nature of the contract and therefore the general circumstances of the case. Such
circumstances could also be (i) the country in which the contract was entered into or (ii)
The country where the payment was to be made. In such a contract, if a payment
is to be made, it should be of the tender governing the country during which
payment is to be made.

The scope of the Unit is given below:

1.1 Meaning and Definition of a Contract

The meaning and definition of a contract are discussed below with reference to some eminent jurists.